A Walk Through Romantic Verona 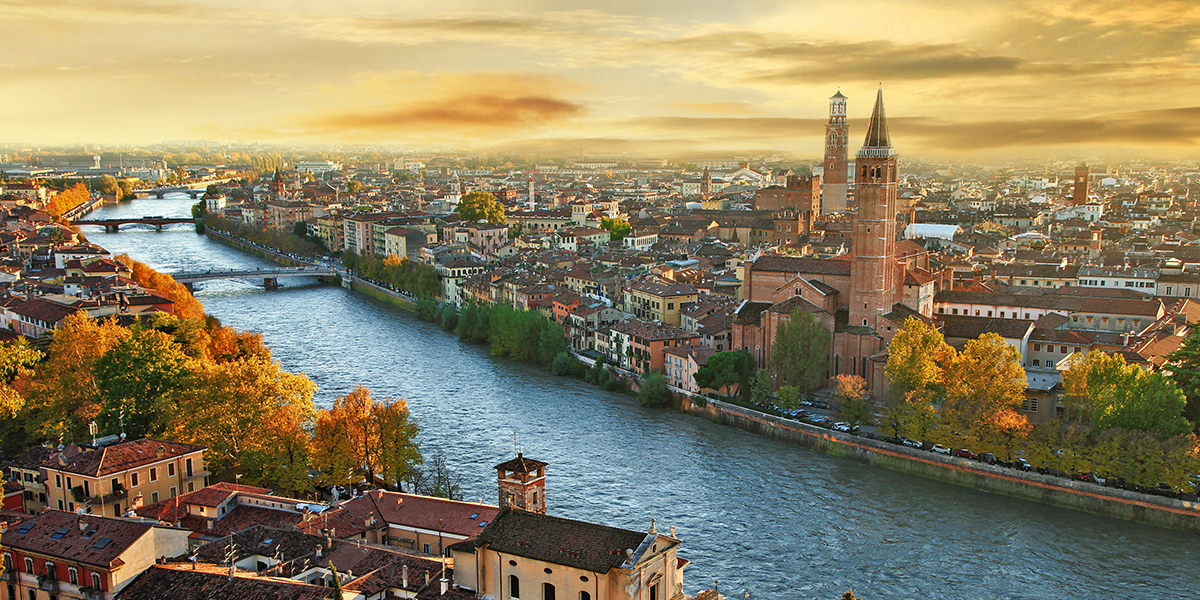 As we are washing down a tasty appetizer of sardine in saor, sweet and sour sardines, a specialty of Venice and surroundings since time immemorial, with crisp white wine from the vineyards of Soave, a young man at the neighbouring table suddenly gets down on bended knee and asks his pulchritudinous table companion to marry him! We applaud and take pictures, but there is really nothing particularly unusual about this scene. After all, we are in a trattoria in Verona, the very romantic northern Italian city of Romeo and Juliet. Shakespeare’s love story must be particularly popular in Eastern Europe, because a high number of tourists from countries behind the former Iron Curtain come here to gaze at attractions such as Juliet’s (alleged) tomb and Romeo’s (reputed) house. City maps and restaurant menus are available in Russian, and there are direct flights to Verona’s small airport from unlikely gateways such as Rostov-on-the-Don and even Ekaterinburg, a conurbation deep in the dark and distant Ural Mountains. The couple in our trattoria turn out to hail from Poland, where a half-century of communism obviously failed to obliterate romance and old-fashioned etiquette, including kissing of hands and marriage proposals on bended knee.

We start our visit to Verona at the hilltop Castel San Pietro (“St. Peter’s Castle”), the most prominent of a string of fortresses built by the Austrians when they still ruled this part of Italy in the mid-19th century. But then the heroes of Italian nationalism burst onto the stage of history, such as the redoubtable Garibaldi, and by 1870 the Austrians had departed and Verona was part of the newly unified Italian state. The castle features a cypress-lined terrace that offers a superb view of the old town, nestled comfortably in a gigantic loop of the mighty Adige River. This river rises in the Alps just north of here, in the vicinity of the Brenner Mountain Pass, then lazily meanders through the flat countryside of Veneto Province on its way to the Adriatic Sea. Its cold waters and powerful current protect Verona on three sides against any attackers. A wall was only needed on the south side, it was built during the Middle Ages, and it still exists, punctured here and there by big gates through which people and vehicles pour in and out. In the past, one could also enter the city via three bridges, including the rock-solid Ponte Pietra or “bridge of stone,” built 2,000 years ago by the Romans. Even more impressive is the fortified medieval bridge named after the Scaligeri Family, local rulers during the 1300s. The Scaligeri were the men of the “ladder,” scala in Italian, and you find their heraldic ladder plastered all over town; most prominently so in their mausoleum, an assortment of sarcophagi placed on top of high pillars, so that even in death they can continue to look down on the hoi polloi – in some cases literally “from their high horse.” A few Scaligeri boys also stare sternly at us from paintings in the fine local museum of art and archeology, which happens to be housed in their own mighty castle, extremely well preserved and featuring an interior brilliantly renovated by one of Italy’s greatest architects of the 20th century, Carlo Scarpa (1906-1978). While during the Middle Ages, noblemen often liked to identify themselves with eagles, lions, or bears, the Scaligeris had a thing for dogs – and not exactly for gentle poodles. One of them was known as Mastino, “mastiff,” another one as Cangrande, “big dog.” These intimidating nicknames undoubtedly served to remind their Veronese subjects of the ancient Latin saying cave canem, “beware of the dog!”

We move on to the imposing open space known as the Piazza dei Signori, the “Square of the Lords,” a reference to the city’s administrators and judges, whose emblematic buildings monopolize this site. (The statue in the centre, however, represents Dante, generally recognized as Italy’s greatest writer, who lived here for some time while exiled from his native Florence.) One of these buildings is the Capitaneria, the residence of the Venetian governors or “captains.” The terminology implies that Venice’s possessions were ruled the same way as Venetian ships – with an iron hand. These captains were the real lords of Verona during the four centuries when Venice ruled over this part of Italy, that is, from approximately 1400 to 1800. The capitaneria prominently displays the symbol of Venice, the Winged Lion of St. Mark. This saint, one of the Four Evangelists, was the patron of the “Republic of St. Mark,” as Venice was known until Napoleon put an end to its existence as an independent state.

Adjoining the base of the slender, 80-meter high Lamberti Tower, Verona’s version of the Eiffel Tower but about 700 years older than the Parisian landmark, an archway beckons. We breathe a twin sigh of relief and shame as we safely pass underneath a suspended whale’s rib, a souvenir of a townsman who spent his life sailing the Seven Seas on a Venetian galley. Relief, because the cetacean sparerib did not drop down on our heads; shame, because a local tradition insists that it will fall down on the first honest person passing underneath.

In front of us stretches the former Roman forum, now the lively and picturesque Piazza delle Erbe, the “Square of the Herbs.” This is the pulsating heart of the town, bursting rather indiscriminatingly with a handful of monuments and plenty of market stalls, and lined on one side with cafés, pastry shops, and pizzerias. On the other side, ignored by locals and tourists alike, a statue of a mean-looking Lady Italy brandishes the sword of revenge in the direction of Austria, now a friend and partner within the admittedly crisis-ridden European Union, but historically Italy’s great enemy. The statue was erected after an Austrian biplane dropped a single bomb on Verona in 1915, after Italy’s government had just decided – against the wishes of the overwhelming majority of Italians! – to join the bloody circus of the “Great War” on the side of the Allies. Bombing cities full of civilians was then still seen as a barbarous act; today it is frequently praised as a legitimate and effective way to promote democracy and/or bring about regime change wherever our leaders view such change to be desirable.

Tens of thousands of tourists trek daily to the medieval house claimed on dubious grounds to be that of Juliet, and almost without exception they do so via one of Italy’s most famous pedestrian streets, the Via Mazzini, named after the 19th-century godfather of Italian nationalism, Giuseppe Mazzini. Its pavement consists of slabs of pure marble, a noble material derived from nearby quarries. Verona can afford to use marble freely because the city is wealthy, and much of its wealth is derived from the sale, in Italy and abroad, of the marble of its region. Verona also supplies much of Europe with fruit, and its wholesale fruit market is the continent’s biggest. Last but not least, considerable income is generated by the annual Opera Festival in July and August, featuring Verdi operas such as the immensely popular Aida. They are staged in a stunning venue, the Roman amphitheatre, which is not much smaller than Rome’s famous Colosseum, but much better preserved. With all this money flowing into the city, it is hardly surprising that locals, rather than tourists, appear to patronize Gucci and the other luxury shops lining the Via Mazzini.

Via a narrow, medieval alley, we reach a monumental Roman city gate, the Porta Borsari, and a wide street named after it, which happens to be the former Roman main street, the decumanus maximus. The location of a popular wine bar, the Osteria del Bugiardo, is easily identified by a cluster of locals loitering on the sidewalk, sipping vino and discussing soccer matches and papal elections and such. We manage to squeeze inside and get served at a bar bursting with bottles of regional wines, such as the world-famous Soaves, Valpolicellas, and Proseccos, ranging in quality from basic “pasta wines” to top-of-the-line Amarones. But we opt for a lesser-known (and very reasonably priced) wine produced on the hills overlooking nearby Lake Garda, a dry but slightly fruity white Lugana. It serves perfectly to wash down Verona’s version of the Spanish tapas, lilliputian sandwiches loaded with goodies such as mini-sausages with sauerkraut, a culinary tip of the hat to the Austrian former enemies, the local salami known as soppressa, and the sumptuous lardo di Colonnata, smooth and snow-white lard, cured for months in jars of marble - Verona marble, naturalmente! If the historical Juliet really boasted the svelte figure imagined by artists who bring her back to life, for example in the shape of the bronze statue in the courtyard of Juliet’s House, she obviously did not often indulge in this kind of fare. But perhaps Romeo did?